Everything You Need to Know about LiDAR Drone

If you work with drones, chances are you've heard of or even worked directly with LiDAR surveying.

These devices are nothing new on the market, however, they have become increasingly popular and affordable, constituting an excellent alternative for drone users.

If you don't know very well about what a LiDAR drone is, how this equipment works, and what are the main applications of this technology, now, we will help you to answer these and other questions that involve the use of LiDAR drones in aerial mapping.

What is a LiDAR?

What is a LiDAR?

LiDAR is an acronym for "Light Detection And Ranging". It is a remoting sensor that uses light in form of pulsed light to measure the distance to the Earth (variable distance). Combined with information collected by the airborne system, these pulsed lights produce precise three-dimensional information about the Earth's surface and the target object. How does LiDAR work?

How does LiDAR work?

LiDAR sensors send fast light pulses in the form of laser beams that pose no risk to the human eye (Class 1 eye safety), reflecting off surrounding objects (trees, cars, buildings, etc.) or directly to the ground. The exact distance is calculated by measuring the time it takes for the light to travel to each object and back to the sensor. The speed of light is a constant (approximately 299,792,458 m/s), so lidar provides the exact distance between the sensor and the object in real time.

A high-density LiDAR emits hundreds of thousands of pulses per second. All of these measurements are then collected and processed to create a 3D model of the environment, called a point cloud.

This technology captures millions of data to form a point cloud with additional data such as position and shape to represent the environment under study in three dimensions. LIDAR coverage ranges from a few meters to one kilometer, depending on the model.

What is a LiDAR drone?

What is a LiDAR drone?

A LiDAR drone is a drone that carries a LiDAR sensor for data collection. The data collected from LiDAR-equipped drones can be used to make 3D models down to the smallest detail, enabling users to pinpoint features, structures, or areas of interest in perfect detail. In the past, there were three main ways to use LiDAR. The first was on the ground. Mappers needed to hold the LiDAR sensor in their hands or on a handheld mount. The second was mounted on top of an aircraft or helicopter. The third is using a satellite.

Whichever way you choose, you need to pay a lot of cost and manpower, but the data result does not meet the needs of mapping. Until recently, with the development of LiDAR technology, the cost and weight of LiDAR sensors have been greatly reduced, and LiDAR drones have appeared and become more and more common.

Compared with traditional measurement methods, drones with LiDAR save a lot of manpower and cost, making this technology more accessible than ever.

What is a LiDAR drone used for?

What is a LiDAR drone used for?

You can add a LiDAR to a drone and use it in various industries for creating 3D models with centimeter-level accuracy. Check out the following LiDAR drone application: With the recent developments in drone surveying, many myths and misconceptions have emerged around the LiDAR and photogrammetry drone. In fact, there are as many differences as similarities between the two technologies.

What are the advantages of using LIDAR drones?

Understood, but drone LIDAR also has some disadvantages...

The most obvious challenge that comes with working with LiDAR is its cost. Due to greater operational complexity (and the need for more sophisticated components and sensors), you can easily spend hundreds of thousands of dollars on a complete survey solution.

This complexity also widens your margin for error and increases the reliance on an experienced professional. With multiple sensors and information not readily available without a fair amount of processing, extracting the data you need isn't straightforward.

It is also important to keep in mind that traditionally LiDAR sensors are larger than simple cameras. With the growing popularity of drone surveying, the need for a larger drone to handle a heavier payload can add to an already significant expense.

With photogrammetry, RGB reconstructions are obtained in which each pixel is assigned the color that corresponds to reality, while with LIDAR the points are monochrome (without RGB). This limitation can be removed by adopting an RGB camera to the device.

It depends on the case. Drone photogrammetry remains one of the cheapest and most effective methods for aerial data collection. In any case, you should ask yourself several fundamental questions when deciding on one or another method. Let's go to clear cases:

Need to model terrain in densely forested areas? If so, LIDAR is the winner. If these wooded areas appear as patches between which there is visible ground, photogrammetry is still a viable option.

Do you need to capture a large area (thousands of hectares) and time/cost is a critical factor? A laser scanner will be more productive per day, but also more expensive to move. In our experience, it is possible to capture areas of 2000-3000 hectares with a fixed-wing drone in half a week with resolutions of 3-4 cm/pixel.

Is investment a limiting factor? If so, photogrammetry is a more competitive technology.

Do you need each point to be located with a very low margin of error or do the clouds have to be extremely dense? LIDAR is your preference. Be careful, the precision of terrestrial LIDAR is greater than that achieved by similar sensors on board a moving drone.

How much does a LiDAR drone cost?

How much does a LiDAR drone cost?

The LiDAR drone price is a big concern for many customers. While the integration of LiDAR sensors into commercial drones makes LiDAR mapping more affordable, the cost is still difficult to estimate. Because the price of LiDAR drones and sensors can vary greatly depending on the type and features. 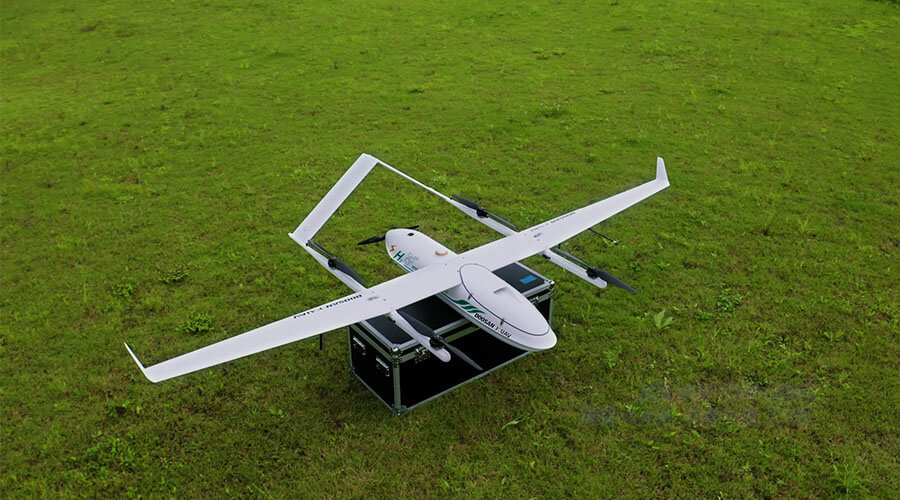 Users can choose to either rent or buy a LiDAR UAV. People who choose to rent a LiDAR drone will need to pay about $1,400 per month. This option also allows users to avoid maintenance costs.

You can also choose to purchase a new drone with LiDAR. An entry-level LiDAR system costs about $23,000. The accompanying UAV ranges from $10,000-$16,000. Additional costs include accessories for the drone, batteries, base stations, and GPS rovers, which can add up to $10,000 in total.

What is often forgotten is the insurance. For a $23,000 LiDAR system, expect to spend at least $2,000 per year on equipment insurance. The cost for basic drone insurance typically is around $500-$750 per year.

How to choose the right LiDAR drone?

How to choose the right LiDAR drone?

The truth is that there is no best LiDAR drone but the most suitable one. When choosing the best mapping drone to fly with your LiDAR system, the terrain of the survey area, payloads, types of drones, and the price should all be considered. 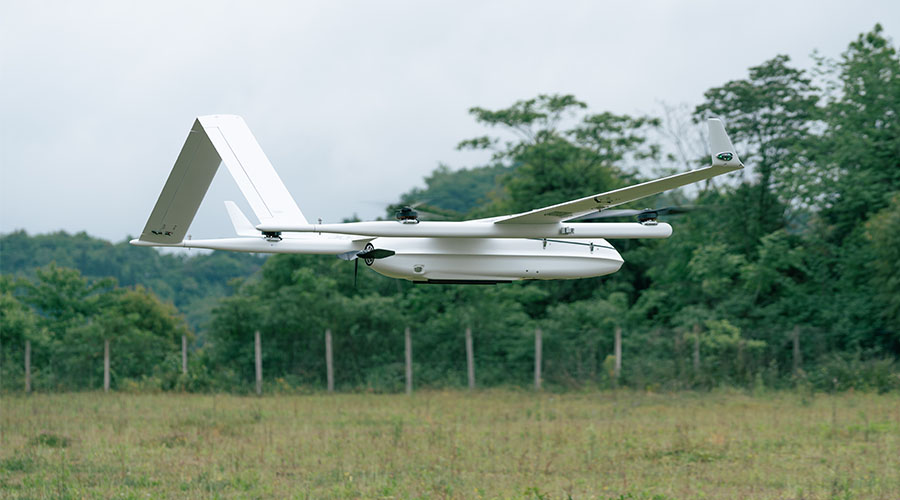 Here are four tips to guide your decision-making:

Terrain and size of the target area: If the terrain for your next project is hilly terrain or cliffs, multi-rotor, and VTOL drones are more suitable because they do not require much space for take-off and landing. But the short range and slow speed of multi-rotor are not suitable for large area mapping. On the contrary, fixed-wing drones require a lot of space for takeoff and landing, but they have a longer range and faster speed, which can cover a large area in a short time.

The weight of your payload: Knowing the weight of the sensors (including LiDAR hardware, batteries, mounts, antennas, and cameras, and whether the payload is within the carrying capacity of your drone is critical. If the drone cannot lift the full payload, it is impossible to fly, let alone collect data.

The height of upright objects: If the target area for LiDAR mapping has tall upright objects, such as trees or buildings, you should make sure the LiDAR UAV can fly high enough to maintain a safe flight height of at least 5 meters from the object.

Ease of integration: If you want to attach a LiDAR sensor to your UAV, you have to consider the size of the LiDAR, the UAV compatibility, and the mounting options possible for the LiDAR. There are systems designed for UAV-based LiDAR, but many of them do not integrate seamlessly between the UAV and the sensors, which means you need to do a lot of work to connect the two.

There are many types of drones in the market, such as multi-coper, VTOL drone, helicopter, or fixed wing. VTOL drones are becoming increasingly popular because they offer the best of both worlds: first, vertical takeoff from small open spaces, and second, aerodynamic flight.

The JOUAV CW series VTOL drones are the best drones selected for large projects. Their vertical take-off and landing feature makes these VTOL drones suitable for more complex terrain, such as mountains, forests, cliffs, etc., and significantly reduces deployment time. The aerodynamic flight allows VTOL drones to fly longer and faster than multi-rotor drones with the same amount of energy.

All CW series drones integrate both RTK and PPK into each drone. RTK allows drones to fly autonomously and precisely on planned routes with centimeter-level auto-landing accuracy, while PPK can output ortho-mosaics and 3D models with up to centimeter-level accuracy.

It also has a wide range of LiDAR sensors, including the JoLiDAR-LR22S and JoLiDAR-120. These two payloads can be deeply integrated with the JOUAV series UAVs, giving them best-in-class absolute vertical accuracy down to 2 cm (0.4 in).

CW series drones have a modular design that's perfect for installing additional modules, whether you're using a LiDAR system or something else. If you decide to add one of the JOUAV cameras, they are natively compatible. Or, you can choose to integrate it with your third-party software or hardware, such as the RIGEL family of LiDAR systems.

Let's take a look at some of the best UAV LiDAR sensors on the market.

JoLiDAR-LR22S is a multi-functional and long range drone LiDAR system, featuring a full 360° field view, a long detection range of up to 1845m, and laser pulse repetition rates of up to 1500 kHz, and integration of a full-frame camera. Thanks to a high-precision laser scanner and navigation system, this LiDAR ensures vertical accuracy better than 3cm and horizontal accuracy better than 5cm. Small, lightweight, and rugged, the JoLiDAR-120 LiDAR sensor offers an ultra-wide angle of 100 degrees and an ultra-high data acquisition rate of up to 1.8 million points/sec. This ｄｒｏｎｅ LiDAR integrates a LiDAR sensor and an RGB camera to simultaneously acquire point cloud data and visible light imagery, resulting in a high-density true color point cloud with a vertical accuracy better than 2cm without ground control points. Weighing less than 2.7 kg, it is designed for use with small UAVs. 9 Best Long Range Drone (2022 Ultimate Guide & Review)
When you want to buy a commercial drone, features like speed, flight time, and camera quality are crucial. However, there is another essential feature that is overlooked by most buyers – the dro 10 Best Commercial & Professional Drones in 2022
Are you looking for the best commercial drones and professional drones of 2022? Check our complete guide for all applcations and industries. Best Fixed Wing Drone in 2022
When most people hear of drones, they think of quadcopter or multi-rotor drones. However, there are many types of drones. Another type is the fixed wing drone, which has a traditional aircraft design
Join Our Newsletter
Get latest share from JOUAV, follow the cutting-edge technology of drones.